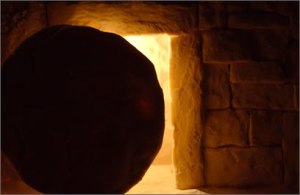 “And we declare unto you Glad Tidings, how that the Promise which was made unto the fathers, GOD hath fulfilled (filled full) the same unto us their children, in that He hath raised up Jesus again . . . That we also should rise to walk in newness of Life !”    Acts 13:32-33 & Romans 6:4

Note: a literal translation of this verse in it’s original greek reveals a beautiful promise -“Therefore, it is by faith, that by the Divine Influence (Grace, the Spirit), the Promise (inheritance) might be sure (stedfast) to all the children . . . Not only to they which are children (heirs) by the law, but to that (they) also which are children (begotten) by the faith of Abraham . . . !”     Romans 4:16

“Blessed be the God (Elohim) and Father of our Lord (Adoni – Sovereign King) Jesus Christ, Who according to His abundant mercy hath begotten us again unto a living (lively) hope, by the resurrection of Jesus Christ from the dead . . . who are kept by the power of God through faith . . . the faith of Jesus . . . unto Salvation ready to be revealed in this last time !”
I Peter 1:3-5

“And this is the name whereby He shall be called, THE LORD OUR RIGHTEOUSNESS !” Jeremiah 23:5-6

“Even the righteous of GOD which is by the faith of Jesus Christ unto all and upon all them that believe: for there is no difference . . . !”      Romans 3:22

“Therefore being by the right hand of GOD exalted (raised up), and having received of The Father the Promise of the Holy Spirit, He (Jesus, Yehushua) hath shed forth this, which ye now see and hear . . . !” Acts 2:33

“For the Promise . . . was not to Abraham, or to his Seed (which Seed is Christ – Anointed), through the law, but through the righteousness of faith (believing God’s spoken Word) . . . Even as Abraham believed God, and it was accounted (reckoned) unto him for righteousness. Know ye therefore, that they which are of faith, the same are the children of Abraham . . . !”
Romans 4:13 & Galatians 3:6-7

Who against* hope believed in hope, that he might become the father of many nations, according to that which was spoken . . . And being not weak in faith . . .  he staggered not at the Promise of GOD through unbelief; but was strong in faith, giving glory to GOD. And being fully persuaded that what He had Promised, He was able also to perform . . . !”
Romans 4:17-21, ref:10:17

“That no flesh should glory in His Presence . . . For of Him are ye in Christ Jesus, Who of (by) GOD is made unto us Wisdom, and Righteousness, and Sanctification, and Redemption. That, according as it is written, He that glorieth, let him glory in the Lord . . . !”   I Corinthians 1:29-31

“In Whom also ye are circumcised with the circumcision made without hands, in putting off the body of the sins of the flesh by the circumcision of Christ . . . Which He wrought in Christ, when he raised Him from the dead, and set Him at His Own right hand in the heavenly (heavens) ! . . .

Buried with Him in baptism, wherein also ye are risen with Him through faith in the operation of GOD, Who hath raised Him from the dead !  And you, being dead in your sins and the uncircumcision of your flesh, hath He quickened together with Him (Christ Jesus), having forgiven you all trespasses . . . !”
Colossians 2:11-13 & Ephesians 1:19-20

“Not by works of righteousness which we have done, but according to His mercy He saved us (delivered, set free, rescued, healed, and made us whole), by the washing (baptism) of regeneration, and the renewing of the Holy Spirit. Which He shed (poured forth) on us abundantly through Jesus Christ our Saviour !That being justified (declared innocent, holy and righteous) by His Grace,* we should be made heirs accord-ing to the hope of Eternal Life . . . !”     Titus 3:5-7“Which hope (confidence) we have as an anchor of the soul, both Sure and Stedfast, which entereth into that within the veil . . . !”  Hebrews 6:19

“For when God made Promise to Abraham, because He could swear by no greater, He sware by Himself, saying, Surely blessing (in Praise and thanksgiving), I will Bless thee, and in multiplying (giving freely with no expectation of return) I will multiply thee ! . . . Wherein God, willing more abundantly to shew unto the heirs of the Promise, the immutability of His Counsel, confirmed it by an Oath . . .

“That whosoever believeth (trusteth, has faith) in Him (the Word) should not perish, but have Eternal Life ! . . . for GOD sent not His Son into the world to condemn the world; but that the world through Him might be saved (delivered, set free, healed & made whole) !”  John 3:15-17

“For if by one man’s offence death reigned by one; much more they which receive by faith, abundance of Grace (the Divine Influence) and of the Gift of Righteousness, shall Reign in Life, by One, Jesus Christ . . . !”      Romans 5:17

“Who verily was foreordained before the foundation of the world, but was manifest in these last times for you. Who by Him, do believe in GOD, that raised Him from the dead, and gave Him glory; that your faith and hope might be in GOD . . . !”
I Peter 1:20-21

“And we declare unto you Glad Tidings, how that the Promise which was made unto the fathers, GOD hath fulfilled (filled full) the same unto us their children, in that He hath raised up Jesus again . . . !” Acts 13:32-33

“As it is written, I have made thee (Abraham) a father of many nations, before Him Whom He believed, even GOD, Who quickeneth the dead, and calleth those things which be not as though they already were. Who against hope, believed in hope, that he might become the father of many nations, according to that which was spoken . . . The Living, Life-giving Word . . . So shall thy Seed be !

And being not weak in faith, he considered not his own body (fleshly power) now dead, when he was about an hundred years old, neither yet the deadness of Sarah’s womb. He staggered (stumbled) not at the Promise of GOD . . . In thy Seed, shall all nations be Blessed ! . . . through unbelief; but was strong in faith, giving glory to GOD. And being fully persuaded that, what He had Promised, He was able also to perform. And therefore (for this reason) it was imputed (reckoned, accounted) unto him for Righteousness !”          Romans 4:17-22

“And these are written, that ye might believe that Jesus (Yehushua) is the Christ (Anointed Heir), the Son of GOD; and that believing ye might have Life through His name !”     I John 20:31

Therefore, “I am not ashamed of the Glad Tidings of Christ: for it is the power of GOD unto Salvation (deliverance, freedom, healing, restoration) to every one that believeth . . . !”
Romans 1:16

It is our prayer that these exceeding great and precious Promises will reveal a richness and power of the LORD, in the story which we so often hear called the Gospel. May our eyes be opened and our ears be anointed with His Spirit, that we may see and believe that great love and desire The LORD has for each and every one of us !
your brother and sister,
Eric & Sarah Wilson – Isaiah Ministries
EWilson7th@gmail.com